I love doing meal prep. It’s probably one of the smartest habits you can form if you want to make a change in your diet and health, adjust your budget, and improve your time management during a busy work week. I started meal prepping because I wanted to eat healthier and I hate having to wonder what I should eat when I’m already hungry (because I usually just go for junk food). (And yes, that food in the header image I made!)

If you don’t have the tools, meal prep can be expensive at first. Over time, the cost of the kitchen gadgets, spices, and containers will become irrelevant, so if your reasons behind meal prep matter to you, take this jump (don’t just buy a $40 spiralizer because you think you’ll use it though. Make smart choices).

I’m going to talk about the prep behind the meal prep. Honestly, the difficulty for me is not the meal prep itself, it’s the planning. To make this easier on myself, I have a whole spreadsheet for my weekly meal prep needs.

I typically start here. I fill in my week (and usually the weekend) with my plans. So, Friday night I’ll be babysitting and while I could bring my own food, eating whatever the kids eat is fine with me as long as I’m not off the rails the rest of the week. You can also see that I’ve planned when I’m eating out! This is really important because if, say, on Tuesday I get invited out for lunch, I’ll already know that I’m eating out three (or four) times this week, which is a little excessive for me already. I always have a choice, but my reasons for meal prepping matter enough to me that I’ll say no without feeling like I’m missing out.

I have a few great tabs, and one of them is recipes. This helps the planning behind meal prep go much easier, especially if I’m feeling indifferent about what I should eat. I want to be excited about all my meals though, that way I look forward to cooking and eating them.

Get ready, because this next part is my favorite… 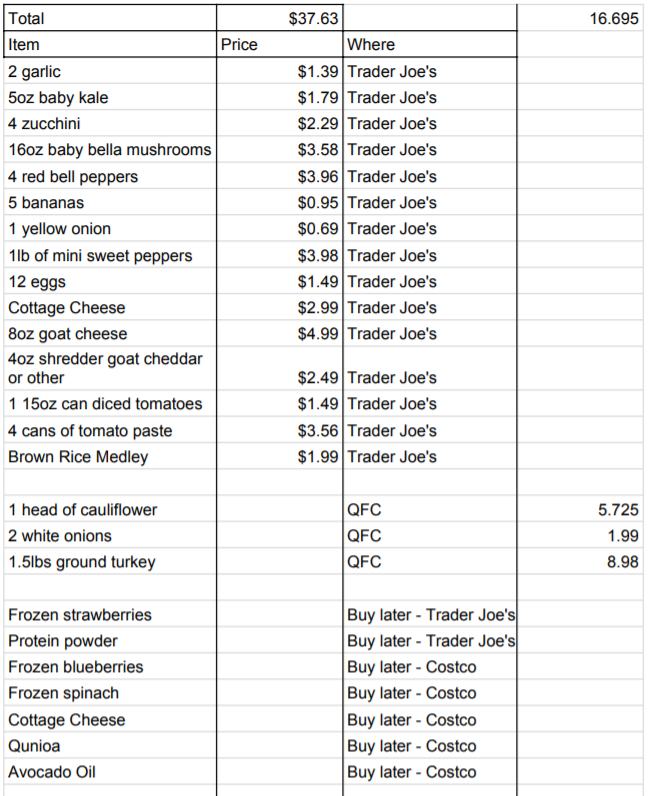 The grocery list!!! So, I make my list based on the recipes I’m using, then decide where I will buy these items (based on amount and availability). I walk around the grocery store with my spreadsheet open, inputting the price of items as I put them in my cart. (Side note: When I first started this and my boyfriend was helping me shop, he’d go grab something on the list and put it in the cart without checking the price. I’d have him go to check and occasionally he would come back with a cheaper item.) I love shopping at Trader Joe’s because their prices are based on unit, not weight, and it’s very easy for me to know exactly what I’m going to pay at the register (assuming I don’t buy alcohol or non-food items). Above, I shopped at QFC for items that were not available at TJ’s, and their items are based on weight. I weighed the onions and cauliflower, actually picking out a smaller head of cauliflower because it was $3 less based on weight, and tried to estimate my total. I was only about $0.10 off in the end 😀

Because I wasn’t going to prep my smoothies on Sunday, I decided I’d buy the ingredients later, and since I didn’t really need anything else from Costco, I didn’t want to make the trip on a weekend. And yeah I have cottage cheese twice because protein and I eat a lot of it, but it won’t need to be on my list next week.

In total, my meal prep cost this week was just under $55, and this is pretty usual. Next week I’ll probably buy some organic chicken from Costco for $25-$30, and freeze 2/3 of it to use over the next couple weeks, so the cost then may be higher, but I won’t need chicken for the rest of the month. Even if I spent $80 on groceries on day for 13 meals + snacks throughout the week, that’s more than double the amount of meals I get for eating out every day (the average American spends $12.75 on each meal out). More food should be reason enough for you to do this! For my situation, I’m a non-married woman who occasionally also lets her boyfriend partake in the dinners and lunches she makes, has the desire to stick to a $250/month food budget, and actually enjoys cooking.

And you’re probably thinking “I don’t have time to cook on the weekends” and I’m going to say “We all have the same 24 hours” and then you’ll say “well you must have more time than me” and I’ll say “I make meal prep a priority”. I have ditched friends on the weekend to meal prep, not because they aren’t important to me, but because I’m important to me. It’s a little selfish, but I can reschedule a couple hours of time with my friends much more easily than I can reschedule 6-8 hours of meal prep. And we all gotta eat. I can even talk on the phone or watch shows I like while meal prepping. And later, I’ll have an extra $12.75 sitting around in which I can go out with my friends for a treat because I put in the work to relieve my stress and my budget around food.

View all posts by avivayalla

There was an error retrieving images from Instagram. An attempt will be remade in a few minutes.